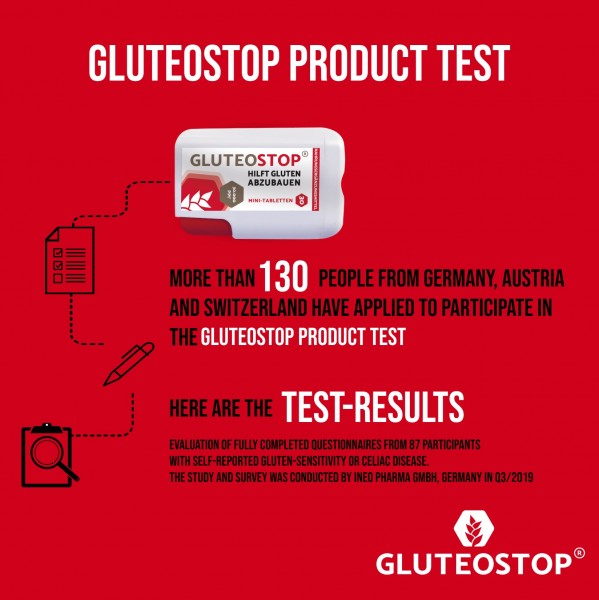 We asked ourselves, what is your opinion about GluteoStop®? In which situation can GluteoStop® help you best and what experiences have you had with unintentional gluten intake. Our current product test provides answers to these and other questions.

1) How long have you been following a gluten-free diet?
2) Did GluteoStop® work for you?
3) Would you recommend GluteoStop® to friends and family?
4) Do you find GluteoStop® convenient to use?
5) How many times a year do you accidentally ingest gluten?
6) Are you experienced in accidental gluten exposure - so-called "gluten accidents"?
7) Are you aware that gluten-free labeled products (e.g. with the crossed grain symbol of The Association of European Coeliac Societies) can contain up to 20 mg gluten per kg of food product?
8) Have you recently declined social invitations due to fear of accidental gluten exposure?
9) In which situation did you find GluteoStop® particularly useful?
10) Would you purchase GluteoStop®?

But let's start from the beginning. Ineo Pharma GmbH started the test campaign for us in October 2019. The participants from Germany, Austria and Switzerland were able to apply for a free test package on the GluteoStop® homepage. The only requirement for participation in addition to the age of legal majority was that they suffered from gluten sensitivity or celiac disease. After the test phase, the participants were invited to fill out a questionnaire to report on their experiences with GluteoStop®. The data were evaluated at the end of 2019 separately for the entire participants as well as for participants with gluten sensitivity or celiac disease.

Over 130 people applied for our test. 87 participants met the conditions for participation and completed the questionnaire in full. 50 participants said they were sensitive to gluten (NCGS) whereas 37 had celiac disease.

1) How long have you been following a gluten-free diet? 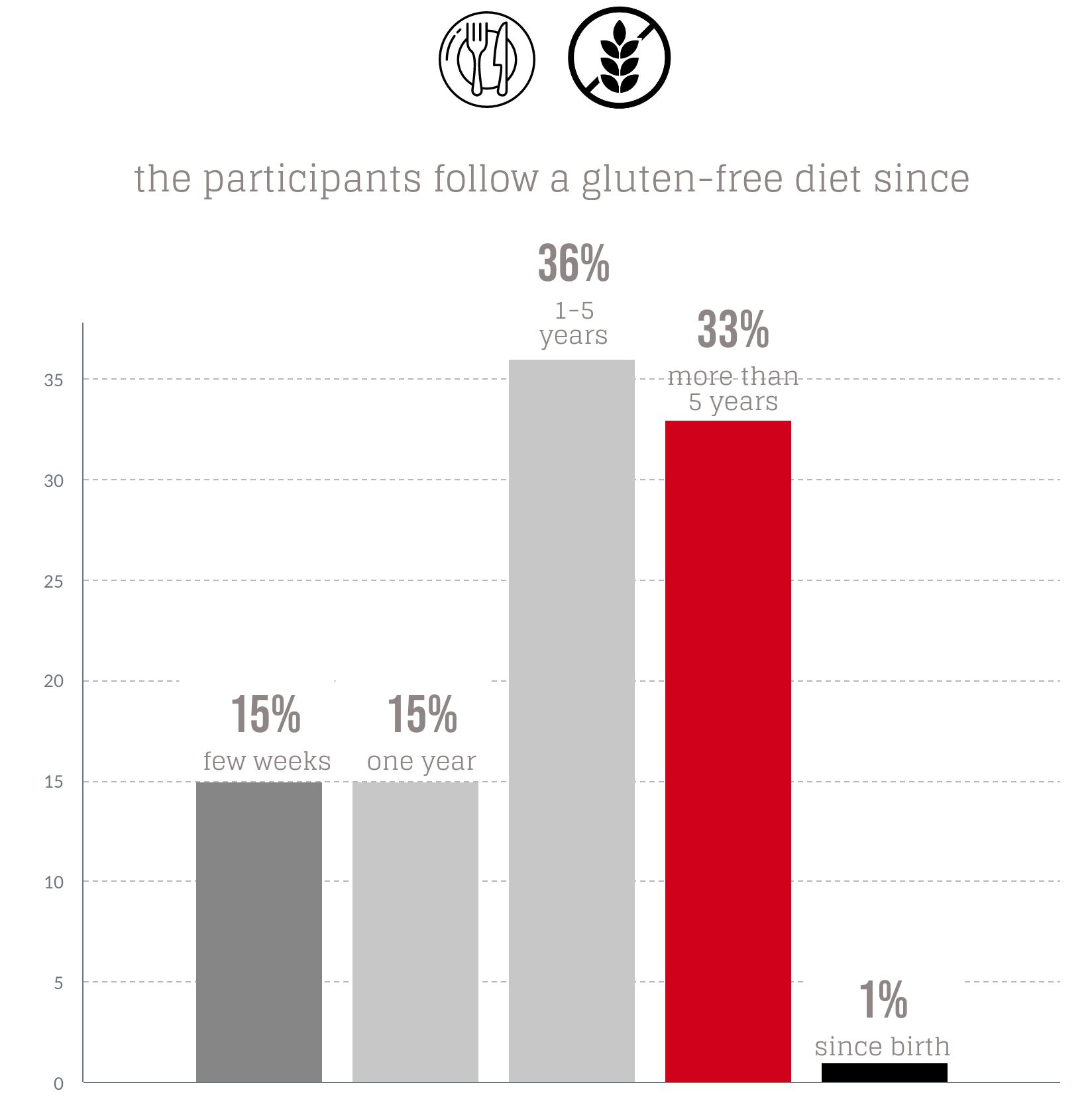 2) Did GluteoStop® work for you?

We were particularly pleased that 92% of the participants stated that GluteoStop® worked for them. This was confirmed by both groups, the participants with celiac disease and with gluten sensitivity.

3) Would you recommend GluteoStop® to friends and family?

We were even more impressed by the result when asked whether the product testers would recommend GluteoStop®. The result is stunning and confirms that with GluteoStop® we have developed an effective aid that can support people with gluten intolerance. 94% of all participants would recommend GluteoStop®. It was even 95% of those with celiac disease. Making a recommendation is an act of trust and is based on subjective experience and evaluation. Trust is the basic requirement of every human relationship. You can't buy trust in a product, you have to earn it. 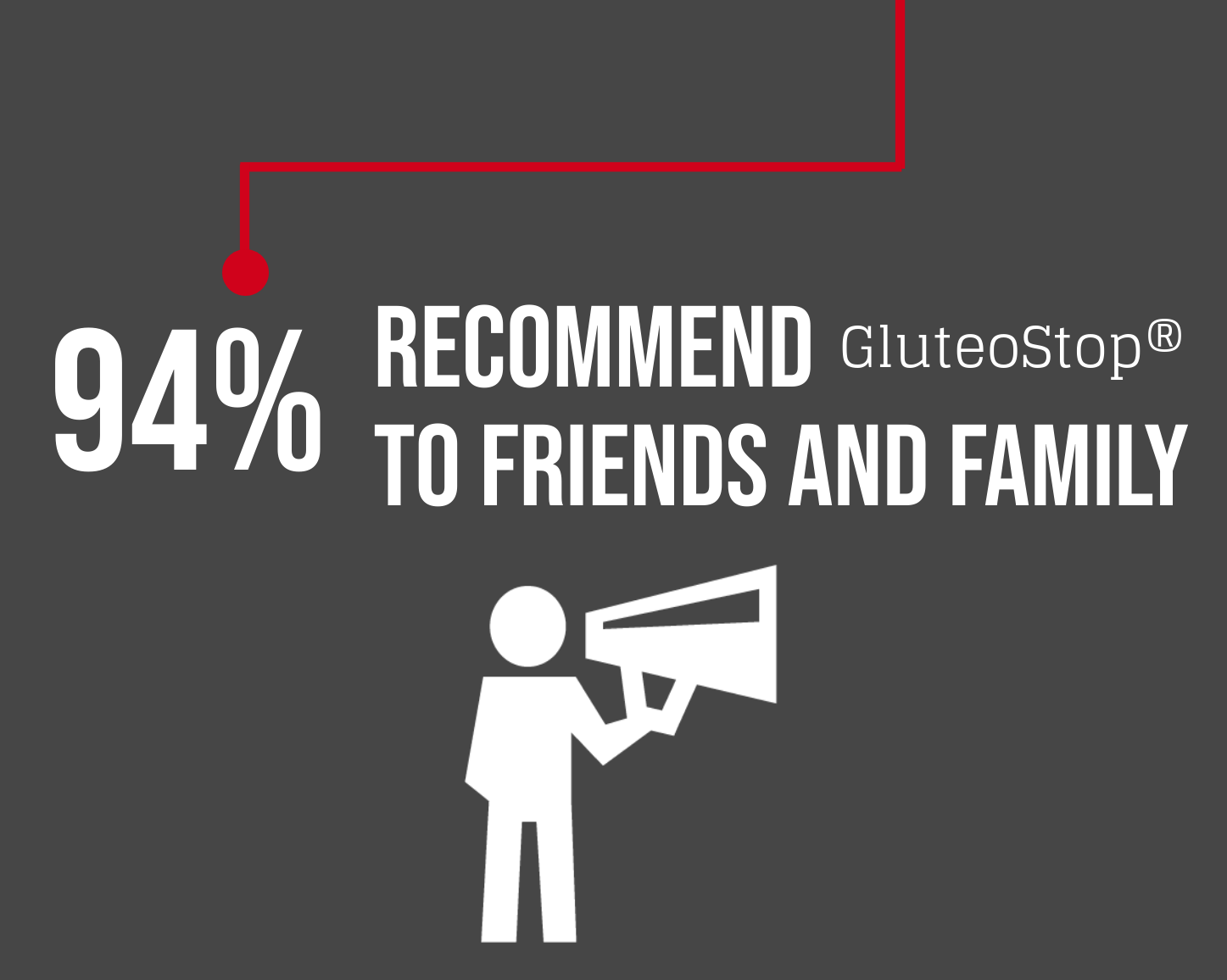 4) Do you find GluteoStop® convenient to use?

Our goal in developing GluteoStop® was to create a product that can be used anytime, anywhere. A gluten-free diet is easy to implement for many of those affected at home, since you have everything under your own control. As soon as you leave your own four walls, it becomes difficult and you are dependent on other people and their knowledge of gluten-free nutrition, gluten free cooking, food preparation and risk of contamination. It was therefore important to us to design a product in a way that it could be used easily, especially on the go. The tablets should be kept as small as possible so that you can take them without water. Dosage should also be child's play. And finally, the use of GluteoStop® should be as discreet and unobtrusive as possible, so that you don't have to be exposed to unnecessary questions or angled looks. The product pack should fit in any handbag or trouser pocket thus you can always carry GluteoStop® with you.
The testers have confirmed that we are right with this. 98% of all test participants find GluteoStop® convenient to use. 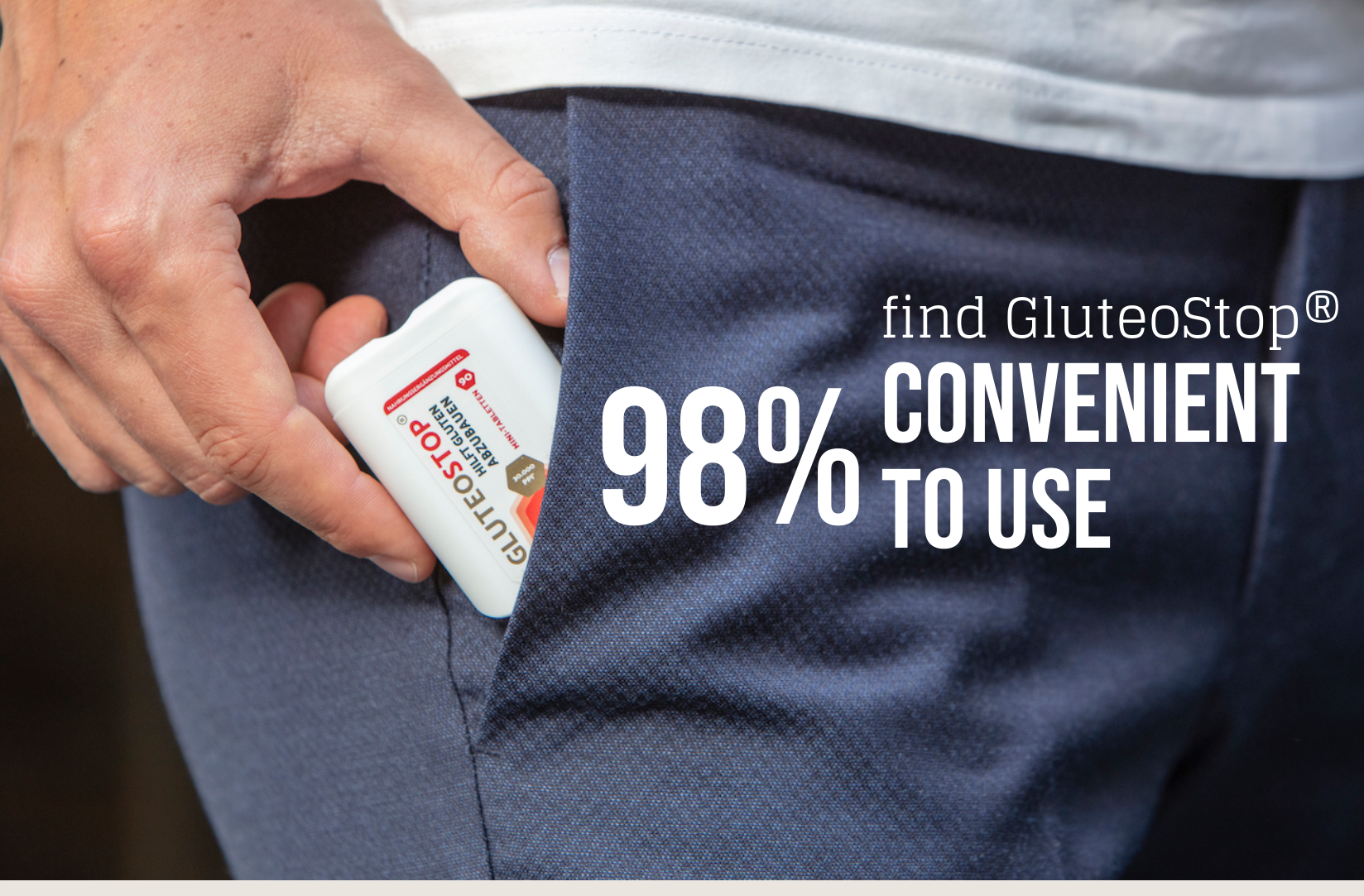 5) How many times a year do you accidentally ingest gluten?

We wanted to know from the study participants what experiences they had with unintentional gluten exposure. Current scientific studies have found that even people with celiac disease who were convinced to eat strictly gluten-free consume an average of 150 - 400 mg of gluten daily unintentionally (Syage et al, Am J Clin Nutr. 2018).
All participants in our GluteoStop® product test also stated that they unintentionally ingest gluten several times a year. In more than a third of gluten-sensitive people, it happened several times a month that gluten was ingested unintentionally. This data underscores the need to provide aids such as GluteoStop® to those affected to reduce the consequences of unwanted, unintentional exposure to gluten. 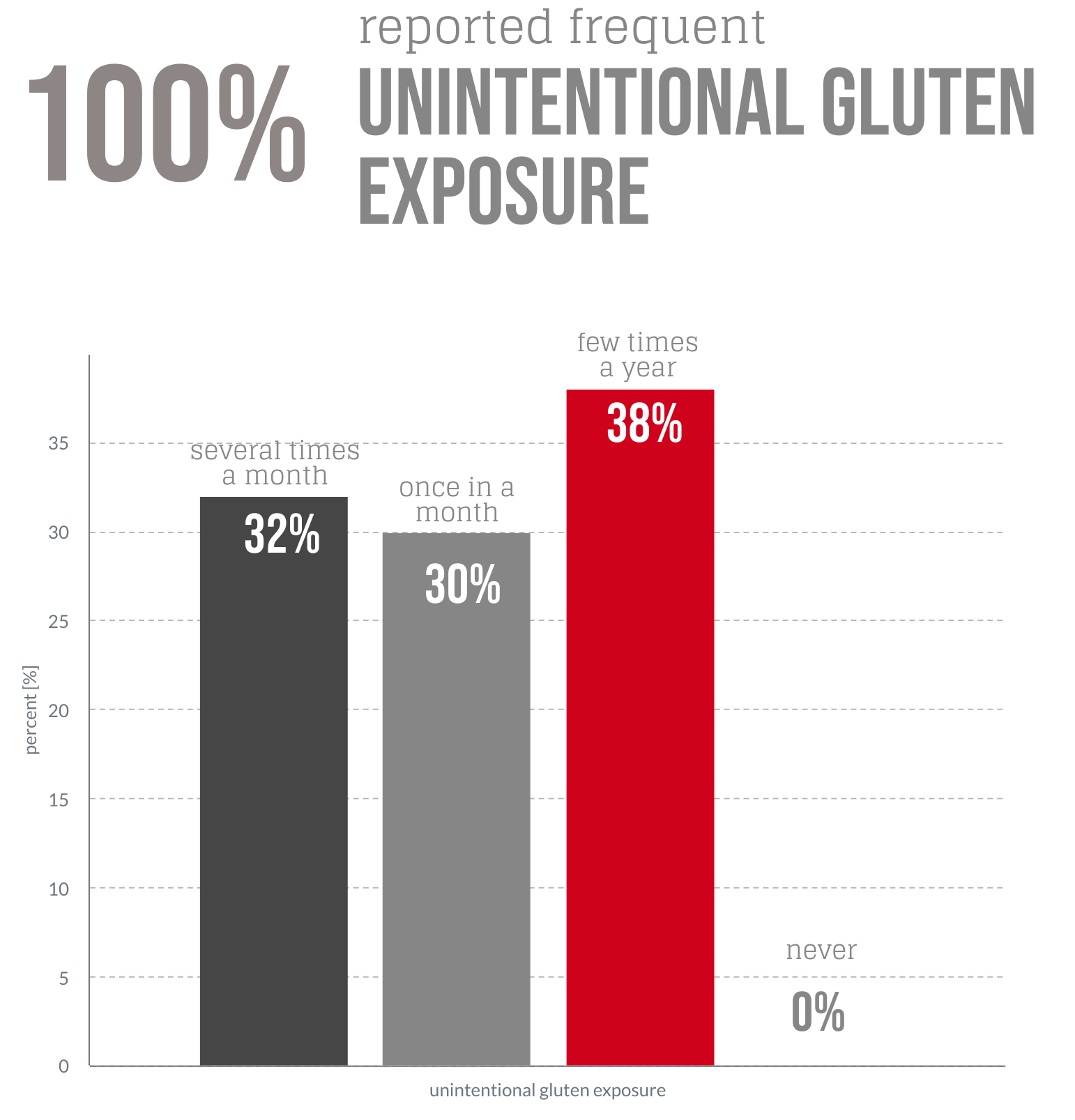 6) Are you experienced in accidental gluten exposure - so-called "gluten accidents"?

With all precautionary measures, gluten can be inadvertently ingested. Most people with intolerance to gluten react with the same symptoms as before their diagnosis. Abdominal pain, diarrhea, stomach cramps etc. But also, headache, dizziness, nausea or skin reactions can be signs of a gluten accident. Not everyone responds equally quickly. The intensity can also be different, sometimes more violent, sometimes less bad, sometimes longer or less long. The reaction to a gluten accident is very individual. The time from the unintentional gluten intake to the onset of the reaction is also very different. In some people, reactions can occur after just a few hours, but only two to three days later. Accordingly, it can take different times for the reactions to be over again. In some cases, the consequences can be felt after just a few hours but also up to a week or even longer.
91% of all study participants know of such gluten accidents. In the group of people with celiac disease, it was 98% of the participants, of whom 95% stated that they have had gluten accidents several times. We have developed GluteoStop® to mitigate such gluten accidents. 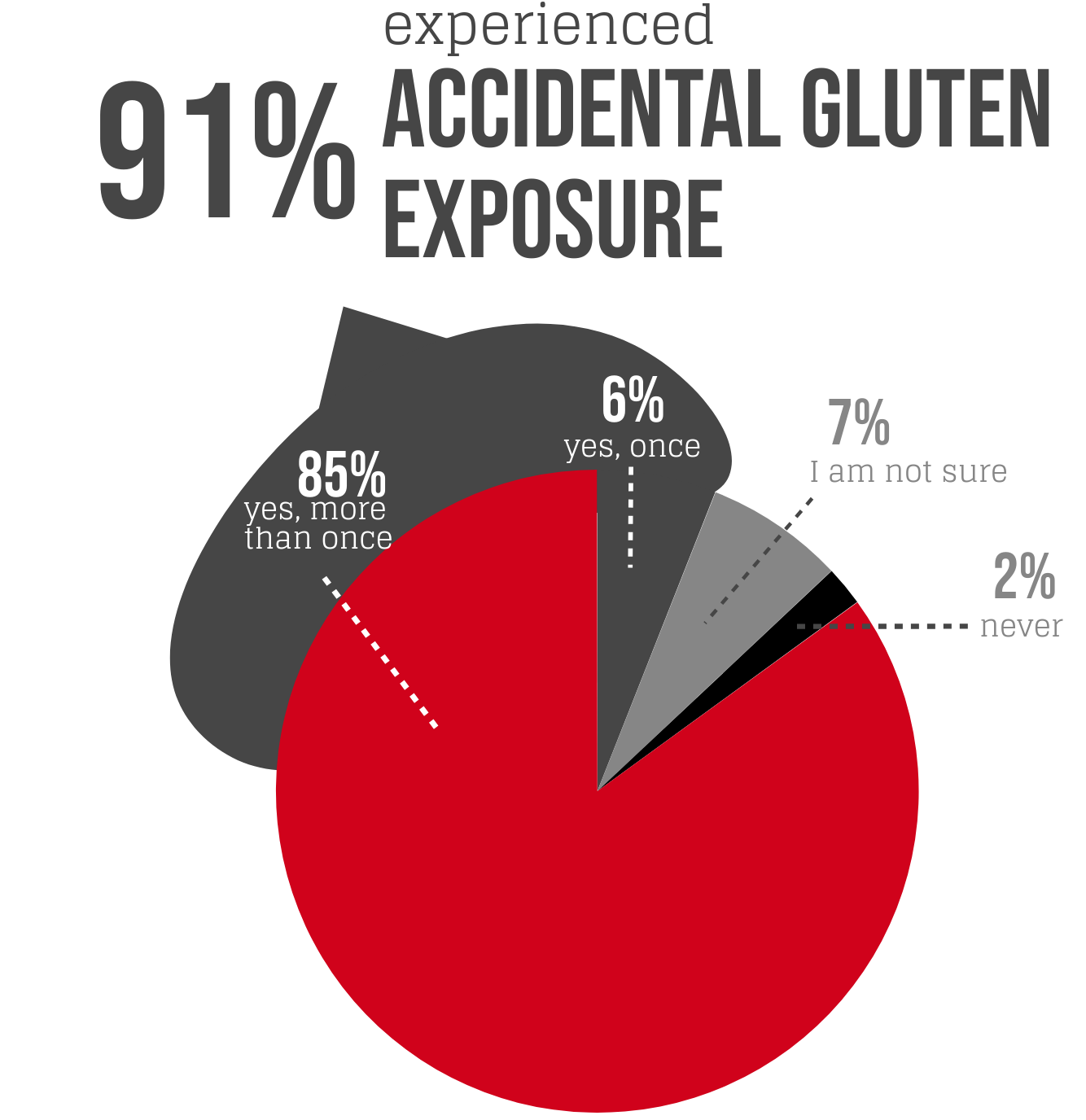 7) Are you aware that gluten free labeled products (e.g. with the crossed grain symbol of The Association of European Coeliac Societies) can contain up to 20 mg gluten per kg of food product?

We were particularly surprised by the result of the question about the permitted amounts of gluten in products that are labeled as "gluten free". Here, more than a third of the participants stated that they did not know that products labeled as "gluten free" or with the symbol of the "crossed grain symbol" may still contain up to 20 mg gluten per kg of food according to European food law.
In the group of people with celiac disease, 38% were not aware of this limit. A lot of education and clarification is still necessary here. There are some people who like to say that there is no such thing as “hidden gluten”. We do not share this opinion and that is why we developed GluteoStop®. As our survey showed, the majority of the participants did not know that even products labeled with “gluten free” may still contain up to 20 mg gluten per kg of food. Products that are reduced in gluten, but still contain 100 mg gluten per kg, can be advertised by the food industry as products with "very low gluten content" and they can even say "specifically formulated for coeliacs " or "suitable for coeliacs”. Many renowned scientists are convinced that such a large amount of gluten leads to damage to the intestinal mucosa in sensitive groups of people. In those with celiac disease, there is definitely an inflammatory reaction triggered by such high amounts of gluten. 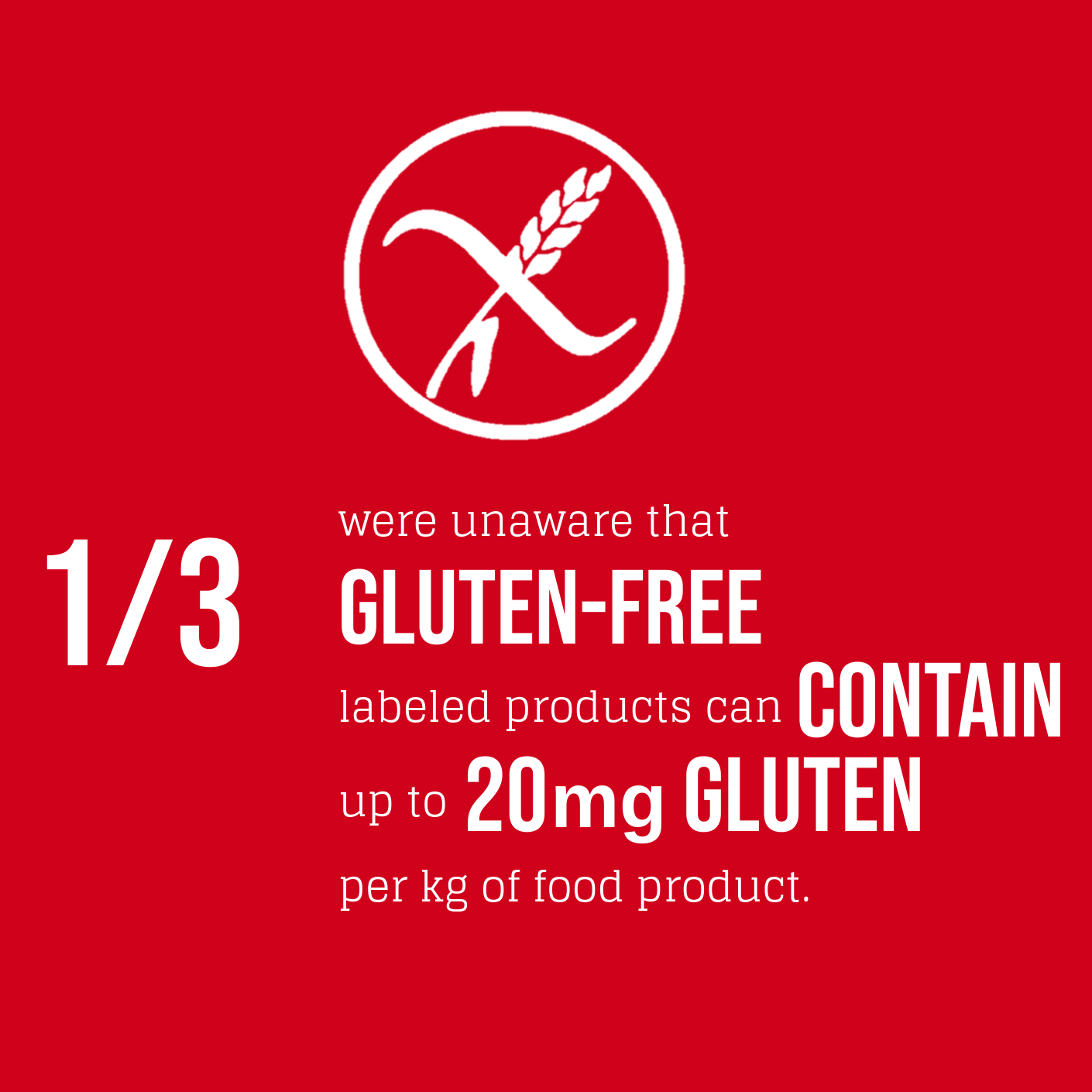 Interestingly, different countries, including Australia and New Zealand, have taken a different route in terms of labeling requirements. Products may only be labeled as "gluten free" if analytically no more gluten can be detected. The detection limit is currently around 3 mg gluten per kg of food, that means almost 10 times lower than the limit in Germany and EU.
We understand “hidden gluten” in addition to the residual gluten described above, but also the gluten that gets into a food through contamination. Examinations e.g. food monitoring in Baden-Württemberg, Germany by the local authorities showed in 2018 that gluten with more than 80 mg per kg of food could be detected in 10% of the samples of packaged products and even in 36% of the samples of unpackaged products. Only samples that did not contain any indications of gluten in the labeling were examined.

8) Have you recently declined social invitations due to fear of accidental gluten exposure?

It is not surprising that the majority of the participants, who all suffer from gluten intolerance, have already refused social invitations due to fear of gluten. In the group of people with celiac disease, 59% stated that they had recently canceled invitations. Due to the severity of gluten intolerance and the effects of unintentional gluten intake, it is not surprising that almost two-thirds are unsettled and worried about gluten.
This can lead to social exclusion and a reduction in the quality of life. With GluteoStop® we want to help those affected and provide them with an aid that can break down traces of gluten and thus further reduce the unintentionally exposure to gluten. 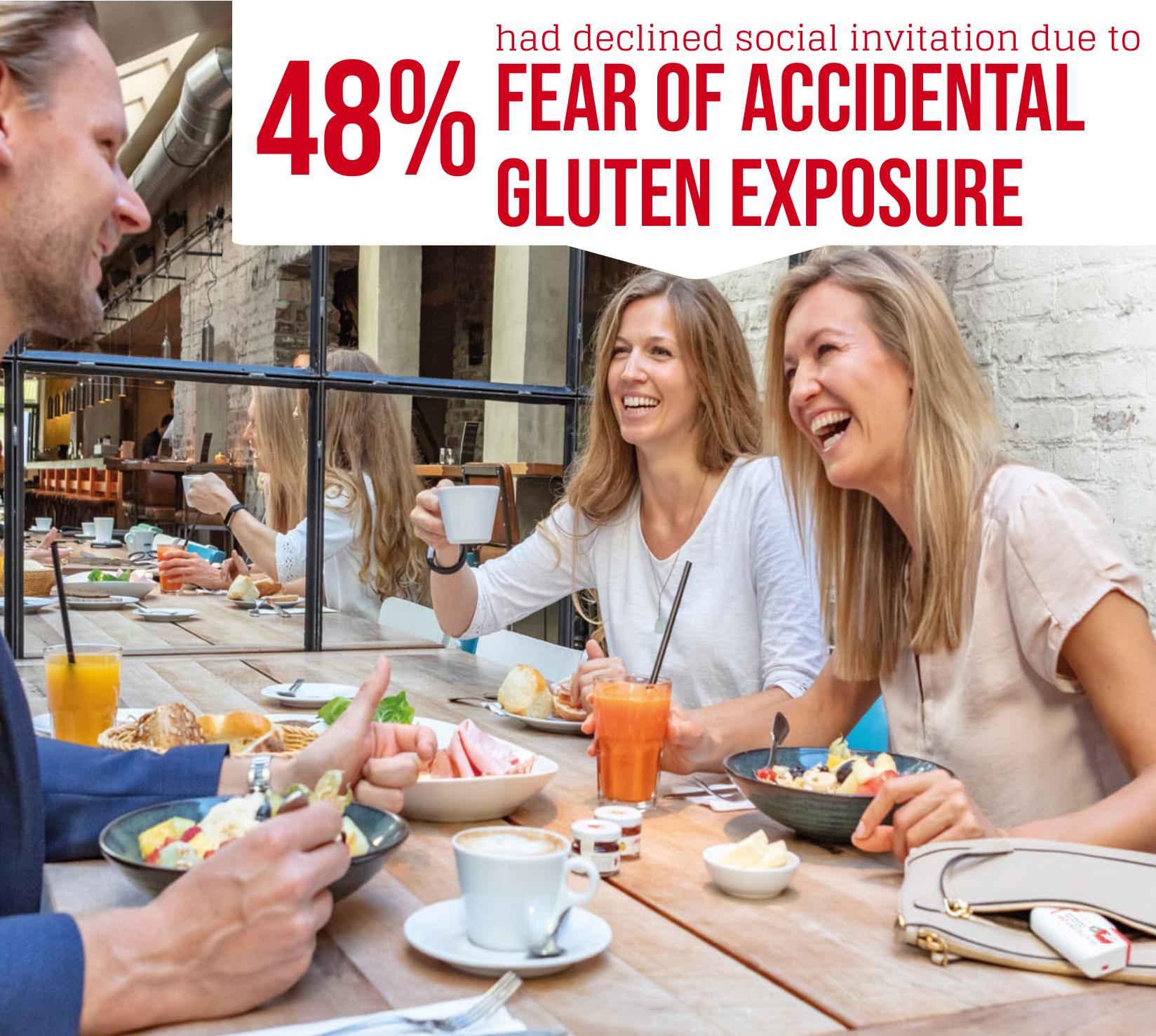 9) In which situation did you find GluteoStop® particularly useful?

We have developed GluteoStop® so that you can carry it with you anytime and anywhere and take it when needed. We wanted to know from the study participants in which situations they were particularly happy that they had GluteoStop® with them. As we expected, most said they were happy to have GluteoStop® on hand, especially when visiting restaurants. 51% of the celiac sufferers reported that they found GluteoStop® particularly useful eating out in the restaurant. In second and third place followed “traveling” and “at friends and family´s house”. At this point, however, we would like to emphasize once again that GluteoStop® is not a miracle and that one should not be reckless when choosing restaurants and dishes. A chef who doesn't know what gluten is or a kitchen that doesn't meet the basic requirements for gluten-free food preparation/cooking should be avoided. It is best to inquire about possible restaurants in advance. You can also find great recommendations for some cities in our blog. 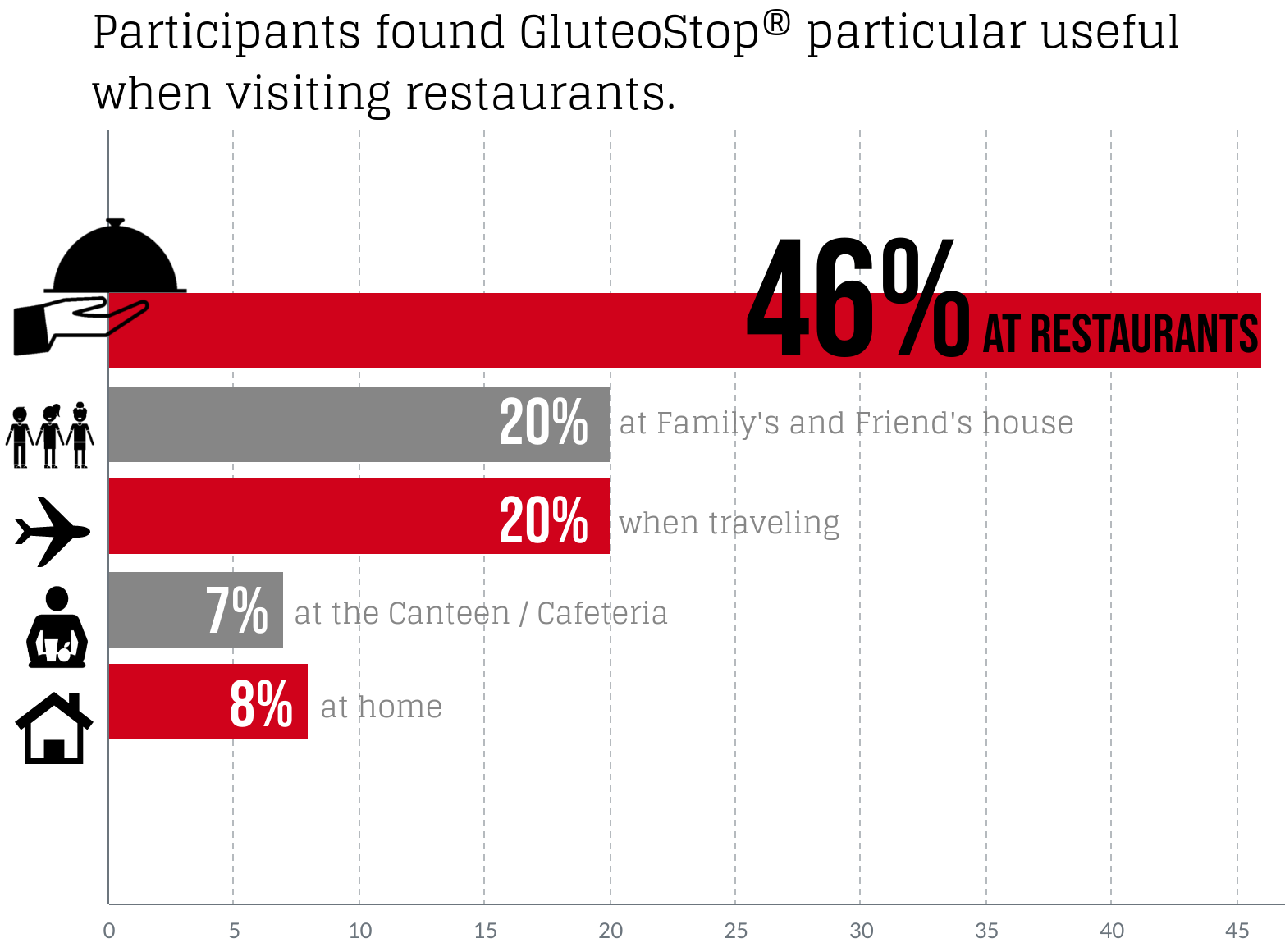 92% of the gluten sensitive product testers would purchase GluteoStop®. So, 9 out of 10 subjects from this group. Across all participants, we are at a terrific 87%. This is an outstanding result and we are very proud. In addition to the effect, the price is the decisive factor if a food supplement is bought or not. With a recommendation rate of 92%, product tester confirm to us what the studies have long shown, GluteoStop® works! Of course, one can always ask whether the price of a product is justified. For us at GluteoStop®, quality is paramount, and we don't want to cut corners here. Unfortunately, a high-quality standard is also associated with high costs. GluteoStop® is made in Germany. The enzyme we use is produced in France by one of the world's most renowned enzyme manufacturers. In addition, we only use high-quality excipients for tablet manufacturing. Instead of animal magnesium stearates, we use, for example, calcium salts from edible fats made from certified sunflower oil. Every batch is examined by external laboratories as we do not compromise on quality assurance. As a medium-sized German company, we are convinced that in the end, product quality is most important, and that savings cannot be made here. 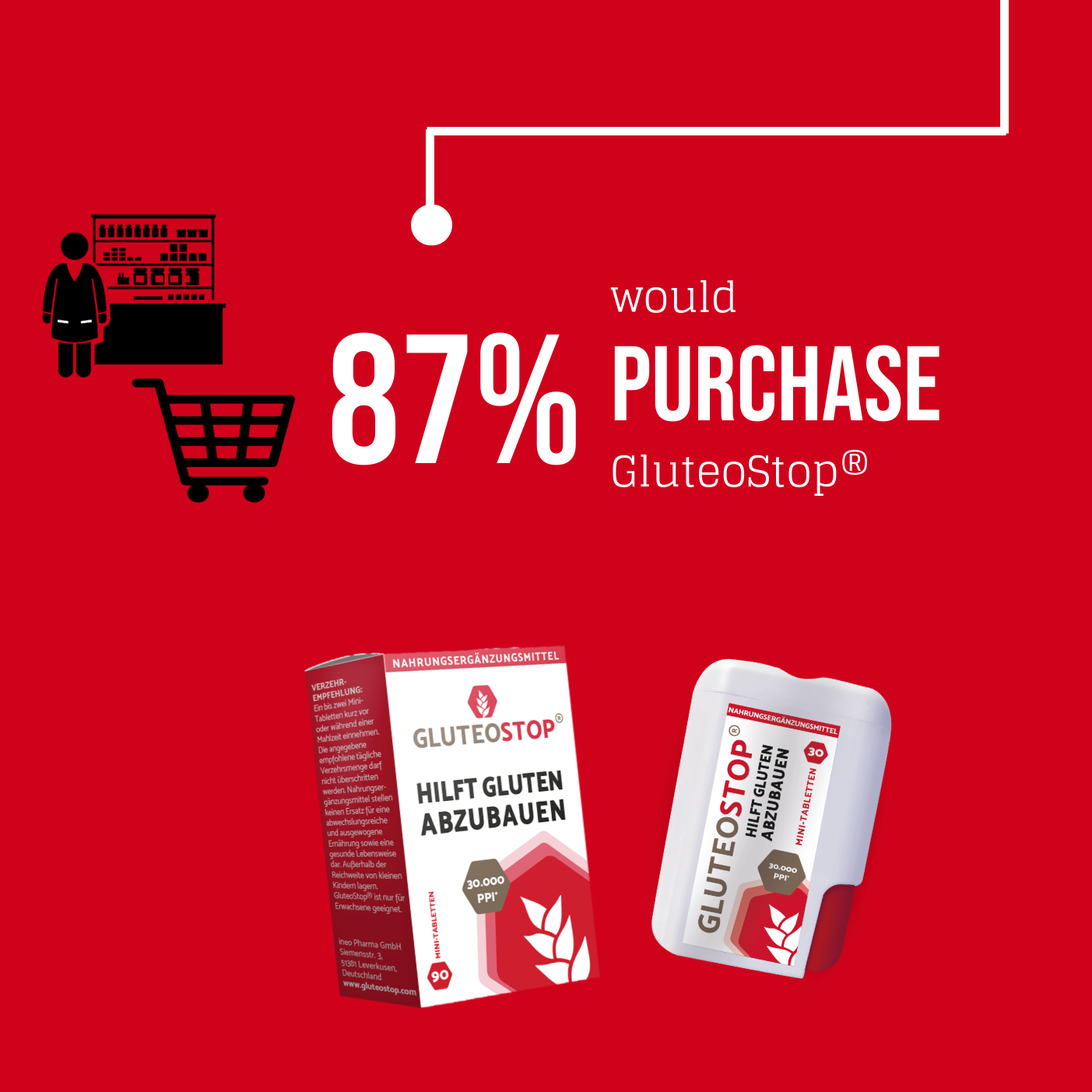 These awesome results of our GluteoStop® test campaign confirms that GluteoStop® is an innovative product which can help many people to make their everyday life easier and to help them improve their quality of life despite their gluten intolerance. If you want to convince yourself of GluteoStop®, you can find GluteoStop® as a 30 and 90 pack in almost all pharmacies in Germany or at www.gluteostop.com. GluteoStop® is also distributed in Switzerland, Denmark, Norway, Sweden, Romania, Slovenia and Lithuania in pharmacies, health shops and specialized online health shops. More countries will soon be added.

This website uses cookies to provide you with the best possible functionality. If you do not agree, the following functions are not available to you: